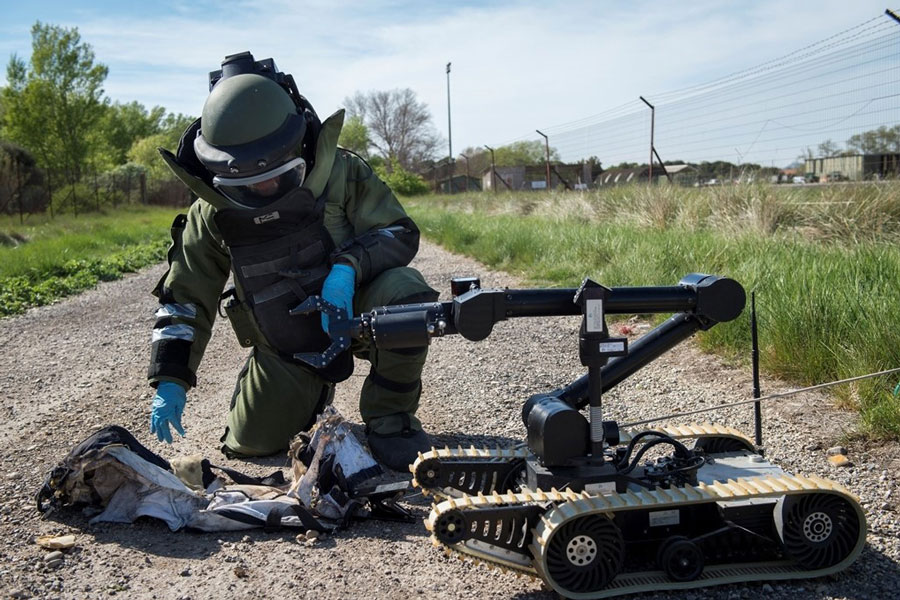 Develop an effective, reliable, safe, and rapid mine clearance alternative to the existing manual techniques and to radio frequency controlled robots.

The solution must demonstrate

As of today, there is no credible estimate of the total number of mines in the ground worldwide, however their number might still exceed 100 million across 50 states and 3 territories. Also, despite the Ottawa Treaty aiming at eliminating anti-personnel landmines around the world, and signed by 164 countries, there would be 2 to 5 million new mines continuing to be laid every year.

A remote neutralization without RF signals

The major technical challenge for safe unmanned robots in the detection and clearance of landmines is having the ability to remotely operate them at large distances (> 300 m) without any radio frequency [RF] signal that might interfere with another signal and hence potentially trigger the explosion of the landmine.

In addition to having immunity to electromagnetic interference [EMI], the perfect solution requires high bandwidth to support real-time signal processing (from several sensors) and decision-making.

SEDI-ATI has designed a range of disposable and lightweight fiber optic spools for the guidance of unmanned vehicles.

The spool, also called “tape”, is directly mounted on the UGV (Unmanned Ground Vehicle) and is connected by its deployable end to the control station. It is by moving that the robot will unwind the fiber. No traction is then exerted on either the fiber nor on the vehicle.

These spools allow for rapid deployment in the field of fiber-guided vehicles, and over long distances of up to 1 km.

The 250 µm fiber is reinforced with a 350 µm diameter coating for optimal ruggedness.

Another advantage of this solution is that the optical cable can be dumped on the minefield, which allows to shorten the demining missions since it is not necessary to rewind the cable. The concept: 1 mission = 1 spool.

SEDI-ATI solution has already been deployed in airports for security checking of unattended luggage or parcel bombs, in refinery plants where RF signals are prohibited, in nuclear or mining plants, pipelines, tunnels, and sewerage systems, where RF signals cannot be transmitted.

Our spool equipped a robot that paraded on July 14, 2019 on the Champs-Elysées

We are also very proud at SEDI-ATI to have contributed to the 14 July 2019 parade on the Champs-Elysées in Paris where the French Army showed fiber-guided unmanned land robots equipped with our fiber spool solution to communicate with the operator.

Relive that event by watching this nice video on our YouTube channel.

The original solution from SEDI-ATI is relaying on a proprietary designed spool, using an ultra-compact (max. 94 mm x Ø80 mm) and disposable optical fiber. The low weight of such a spool (<340 g for 1 km of fiber) allows for its installation on board the robot itself. The fiber deploys as the robot moves, avoiding any traction on the fiber. As a consequence, low-size (250 or 350 µm) and low-cost fibers can be used and left on the field once the mission is over. Different lengths of fiber can be offered (from 300 m to 1 km), depending on the mission requirements. This concept of “one spool for one mission” eliminates the need to retrieve the cable, thus allowing for greater responsiveness in the field and shorter missions.