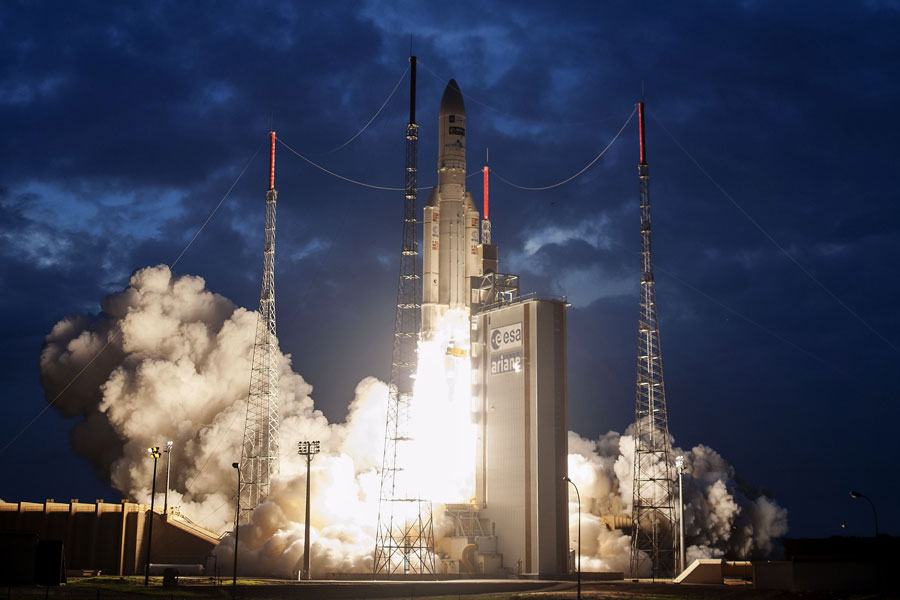 Verifying the integrity of the opto-pyrolines in launchers and satellites.

The challenge
Verify the integrity of the opto-pyrolines on board space launchers and satellites, before activating specific spacecraft functionalities such as the ignition of boosters or the stand and payload separation.

Major constraints
The solution must withstand:

SEDI-ATI solution
We propose an interrogation component consisting in a spatialized fiber optic multimode wavelength division multiplexer [WDM], with a specific dichroic filter on the line port, to control the integrity of the opto-pyroline.

Advantages of the SEDI-ATI solution
We offer a ruggedized WDM with a custom dichroic filter directly deposited onto the line port optical fiber. We master the thin-film deposition in-house. Besides, this fiber-based component is designed with very low outgassing and lightweight materials, as well as with space qualified optical fibers with an epoxy acrylate coating to withstand high temperatures.

Verifying the integrity of the opto-pyrolines in launchers and satellites

SEDI-ATI offers spatialized multimode wavelength division multiplexers to control the integrity of the opto-pyrolines used in launchers and satellites.

Opto-pyrotechnic systems are in widespread use in both launchers and satellites. Intense laser pulses are distributed via optical fibers to activate specific events through controlled explosions. Among the operations triggered by ignition wavelength are the ignition of engines, of boosters and of distancing rockets. Opto-pyrotechnics are also used for stage and payload separation, valve opening, passivation and, if required, neutralization of the launcher. Some launchers can include several hundreds of meters of opto-pyrolines and several tens of pyro-functions.

Although the system has been proven to be both reliable and safe, it is difficult to verify the integrity of the opto-pyrolines.

In order to detect in a safe way a default on the opto-pyrotechnic train line, such as a failure transmission or a weak connection, SEDI-ATI has developed a customizable multimode wavelength division multiplexer [WDM] with specific properties to address this type of application.

The materials are selected with care: very low outgassing, lightweight, space qualified… Therefore, this ruggedized WDM performs its required security-check function under operational conditions of temperature, altitude, vacuum, radiation… Also, its performances of are not affected by acceleration forces, nor by shocks and vibration levels encountered during handling, transportation and launch operations.

Thanks to our in-house capability to do thin-film deposition, we can design any application specific dichroic filters. Our customizable WDM can for instance check the integrity of the line with a very low energy monitoring wavelength, and allow a high-power laser ignition wavelength.

When the WDM returns an unusual attenuation of the interrogating wavelength scattered back to the monitoring line, it reveals that there is a default on the opto-pyrotechnic line. Indeed, the resultant light signature is analyzed by an OTDR (optical time-domain reflectometer) that provides detailed information on the location and overall condition of splices, connections, defects and other features of interest.

When it is proven that there is a failure on the transmission line, the opto-pyrotechnic device prevents the ignition wavelength from being fired. On the contrary, when the monitoring scattered light signature is “normal”, the ignition laser is allowed to activate the opto-pyro initiator [IOP] (or opto-pyro detonator [DOP]) that will trigger the booster separation or motor ignition for instance.

SEDI-ATI is very involved in the program which consists in monitoring the integrity of the optopyro lines used to trigger the ignition of the P120C engine. The P120C will serve as a lateral booster for the Ariane 6 launchers and will equip the first stage of Vega-C. On October 7, 2020, the last successful firing test of the motor took place. The maiden flight is scheduled for 2022.