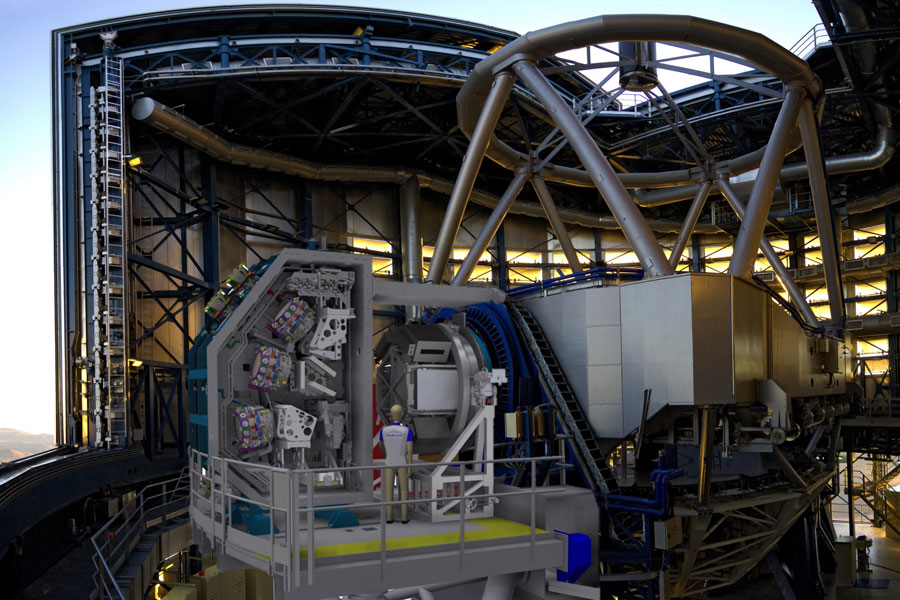 MOONS: the Multi-Object Optical and NIR Spectrograph of the VLT, fed with a thousand optical fibers!

MOONS: the Multi-Object Optical and NIR Spectrograph of the VLT, fed with a thousand optical fibers!

SEDI-ATI has delivered 64 slitlets of 16 optical fibers each, to form 2 identical slits of 512 fibers, aimed at transporting the light of celestial objects from the focal plate of the VLT to the two cryogenic spectrographs of the MOONS instrument.

MOONS is the new multi-object optical and near-infrared spectrograph mounted at the Nasmyth focus at the VLT. It has been designed primarily to study the formation of galaxies and their evolution throughout the history of the Universe, from the properties of millions of stars in the center of our own Milky Way, to millions of galaxies in the early Universe.

The MOONS instrument actually consists of two identical cryogenic spectrographs, cooled to 130 Kelvin in a single cryostat. Each spectrograph is fed with light by a fast and extremely accurate positioning system of about 500 optical fibers. MOONS will thus enable astronomers to obtain optical and near-infrared (640-1700 nm) spectra of about 1000 objects at the same time!

With these high-resolution spectra, astronomers will be able to measure the chemical abundances of certain elements in the atmosphere of stars, in relation to their dynamical properties. This will allow the reconstruction of the chronology of events that led groups of stars to reach the characteristics they exhibit today.

The study of our own galaxy offers a unique opportunity to study all the components of a galaxy, star by star. In this way, astronomers will be able to understand the details of the processes that take place during the formation of a spiral galaxy like the Milky Way.

In addition, the spectroscopy performed by MOONS will make it possible to measure the speed at which stars are moving away from or towards us. MOONS thus acts as a galactic GPS, allowing us to produce a 3D map of our Galaxy.

The MOONS fibre system
In partnership with the “Observatoire de Paris – GEPI”, SEDI-ATI has built two 200 mm curved slits, each of which contains 512 fibres of 150 µm core with Polyimide coating.

Each slit is placed at the entrance of one of the two MOONS spectrographs, in a cryogenic environment at 130 Kelvin.

A slit is composed of 32 slitlets arranged in a way to give the slit its curved shape. And each slitlet comprises a perfect alignment of 16 optical fibers.

The assembly is completed with inline multifiber hermetic feedthroughs, with one feedthrough per slitlet. The multifiber feedthroughs are mounted on a large flange to isolate the two spectrographs in the cryostat from the rest of the instrument.

Each bundle of 16 fibers is threaded into a long metal flexible tube on either side of the flange. It provides mechanical protection for the fibers, which will endure high mechanical stresses (rotation, displacement, short bending radius, etc.) in the mobile part of the instrument RFE (Rotating Front End).

At the focal plate of the telescope, the fiber bundles are split into individual fibers. Each fiber is connected at its end to a very short optical patchcord by a tiny connector and is positioned at the focus of the telescope via an FPU (Fiber Positioning Unit).

Not all the fibers in the slit are connected to FPUs: there are 1024 fibers in the two slits, for 1001 FPUs, which allows some flexibility matching FPUs to slitlets. Each fiber that is connected to an FPU can scan an object. Thus, 1001 celestial objects can be observed simultaneously!

Your specific request
Manage Cookie Consent
SEDI-ATI's website uses cookies that are essential to make our site work properly, to enhance its usability (functional cookies), and to help us understand how our visitors use our website (analytics cookies). By clicking “Accept” you agree to the use of all cookies. By clicking “Save preferences”, you agree only to the categories you have selected.
Manage options Manage services Manage vendors Read more about these purposes
View preferences
{title} {title} {title}