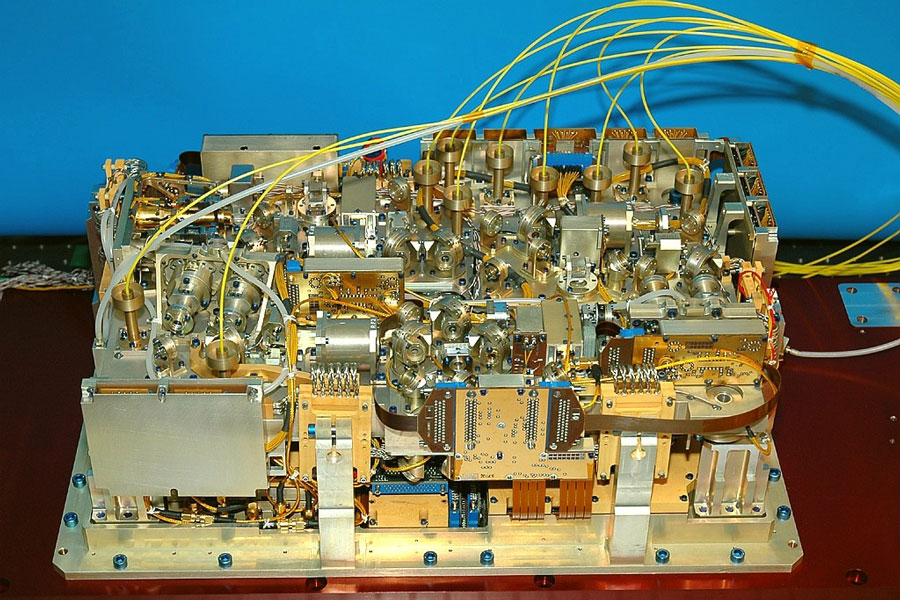 SEDI-ATI optical fiber assemblies are mounted on the space atomic clock PHARAO on board the ISS to test Albert Einstein’s predictions on general relativity.

Measure the time with a 10-16 resolution in order to test even more precisely Albert Einstein’s famous theory of general relativity, from space!

The solution must have relatively low out-gassing properties, be lightweight, and be as small and compact as possible.
It must also demonstrate high stability under:

The cold caesium atom clock PHARAO was developed by France CNES space agency and the laboratory SYRTE. The main purpose of this atomic clock is to reach a time resolution of about 10 ps, with a relative frequency resolution of 10-16, which corresponds to a time error of about one second over 300 million years !

To manipulate caesium atoms, the caesium tube must be linked to the laser source by means of optical fibers. In addition, time and frequency transfer is also done using optical fibers.

Our implication in this project

It is in this context, and under the aegis of EADS Sodern, that SEDI-ATI has been involved in the PHARAO project. The company was chosen for its expertise in the choice of optical fibers and materials with the properties required for the space environment, as well as for its know-how in the assembly of fiber components: collimators, cables, polarization-maintaining fibers, and NASA-type FC connectors with very low outgassing materials.

A guaranteed precision in the absence of gravity in space!

To achieve its accurate timekeeping, PHARAO has been attached to the outside of the European Columbus laboratory on board the International Space Station (ISS) in 2016. Indeed, in space, operating in micro-gravity provides a much more stable and accurate time base than in the presence of gravity like on Earth.

PHARAO is not the only atomic clock in space. Actually, it is accompanied by SHM (the Space Hydrogen Maser), which uses hydrogen atoms as a frequency reference and offers better stability but for a shorter time. By coupling the two clocks, ACES provides the scientists with a unique, highly stable time reference in space.

The interest for researchers is that they are now able to compare many different atomic clocks based on atoms other than caesium, under different gravity levels since they now have access to the data from PHARAO and SHM at 400 km high, and from high-performance ground clocks developed by laboratories in various countries worldwide.

Comparing clocks will allow scientists to test Albert Einstein’s theories on space and time, but also other theories in fundamental physics, with a precision that is impossible in laboratories on Earth.

What are the fields of application concerned by this work?